Your partner for powder nozzles for EHLA and LMD

The EHLA process is a patented and award-winning process from the Fraunhofer-Institute for Laser Technology in Aachen. This is a revolutionary approach for the production of corrosion and wear resistant layers. This process is a further development of conventional laser cladding (LC), in which the innovation of the process method is defined by

Compared to conventional LC, higher process speeds and consequently higher coating rates are possible. Coatings can now be produced faster and more economically, while maintaining the decisive quality features of conventional LC (including metallurgically bonded layers without pores and cracks). The following pictures show the technological and economic advantages of the EHLA-process, which finally enable the process to be used in a large-scale production. 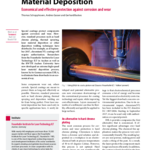 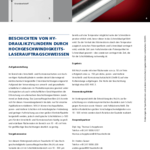